Two novels in one!

I'm a little late in posting about my newest novel release, but it's not too late for you to purchase it here: Two great novels in one!

In July, Harlequin rereleased two books in one, so you can enjoy two stories of faith, strength, and hope in days gone by. 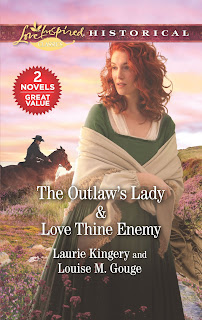 The Outlaw’s Lady by Laurie Kingery

Rebellious rancher's daughter Tess Hennessy seeks adventure—and that's what she gets when she's abducted to chronicle the Delgado gang's exploits! Yet her kidnapper, gang member Sandoval Parrish, isn't what she expected. There's more to the mysterious outlaw than he shows—signs of gentleness and devotion that soften Tess's heart. Sandoval has one goal: retribution for the sister Delgado ruined. He hasn't the time to fall for the stubborn, beautiful photographer whose pictures he needs as evidence. But what can Sandoval do when his plan puts Tess in danger? Torn between the drive for revenge and a newfound love, Sandoval will need his renewed faith to resolve the past…and claim his future.


Love Thine Enemy takes place during the American Revolution in, of all places, Florida! Did you know East Florida and West Florida were British colonies that very well could have joined the revolution when our original thirteen colonies broke with England to form the United States of America? Not only that, but East Florida—St. Augustine in particular—was a haven for countless colonists who remained loyal to the Crown? When I learned that tidbit of history, I knew I had to write about it. Being a romance writer who’s always looking for character conflicts, I also knew my hero and heroine had to be on different sides in the war. That’s when the fun began. Here’s the back-cover copy.


The tropics of colonial Florida are far removed from America’s Revolution. Still, Rachel Folger’s loyalties remain with Boston’s patriots. Handsome plantation owner Frederick Moberly’s faithfulness to the Crown is as certain as his admiration for Rachel—but for the sake of harmony, he’ll keep his sympathies hidden. After all, the war is too far distant to truly touch them…isn’t it? A betrayal of Rachel’s trust divides the pair, leaving Frederick to question the true meaning of faith in God and in country. Inspired by Rachel to see life, liberty, and love through His eyes, Frederick must harness his faith and courage to claim the woman he loves before war tears them apart.
Posted by Louise M. Gouge at 9:41 AM