Love Finds a Home Out West 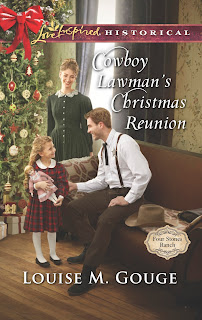 https://www.amazon.com/Cowboy-Lawmans-Christmas-Reunion-Stones/dp/0373425430/
Sheriff Justice Gareau can make outlaws quake in their boots…yet coming face-to-face with Evangeline Benoit once again takes away all his composure. She broke their engagement, and his heart, to marry a wealthy older man. Despite his reluctance, Justice can't avoid the widowed single mother of two when they're collaborating on a Christmas village for the town's children. The loving boy Evangeline once knew has become an unyielding lawman. Forced to flee New Orleans over false allegations, Evie doubts Justice will take her side when the past follows her to Colorado. Especially when he and her troublesome son butt heads. But perhaps the spirit of Christmas will soften his heart and give them a second chance at love. Copyright © 2017 by Harlequin Enterprises Limited, Cover art and cover copy text used by arrangement with Harlequin Enterprises. ® and ™ Limited or its affiliated companies, used under license. 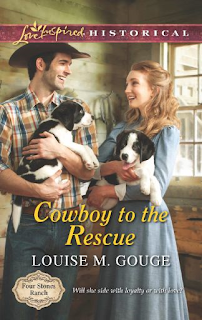 Cowboy to the Rescue September 2014
https://www.amazon.com/Cowboy-Rescue-Four-Stones-Ranch-ebook/dp/B00JIH0QVY
Captivated by the cowboy: Though Georgia belle Susanna Anders agrees to accompany her father on a silver prospecting trip to Colorado, her heart belongs to the South. Then charming cowboy Nate Northam saves her father's life and gives them shelter at his ranch. Feeling gratitude is only natural, but falling for a Yankee? Both of their families would be outraged.
While Susanna's father recovers at the Northams' home, Nate can't help being drawn to the sweet Southern beauty…and wishing he were free to think of courtship. That is until shocking revelations compel both Nate and Susanna to choose where their loyalties lie—fettered to the past or to the promise of a bold new love… 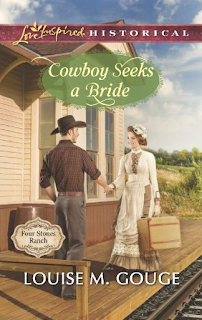 Cowboy Seeks a Bride January 2015
https://www.amazon.com/Cowboy-Seeks-Bride-Stones-Ranch-ebook/dp/B00LZCTEEU
Inspirational Readers’ Choice Award 2nd place
Courted by a Cowboy: Marybeth O'Brien is everything rancher Randall Northam seeks in a wife…if she'd only say "I do." Although his family paid for her train ticket West with the understanding the two would marry, Rand won't pressure her to set a date. Especially since he suspects she's learned about his reckless past. Who would want to marry an untamed cowboy like him? Marybeth won't marry until she locates her long-lost brother. And when Rand agrees to help her with her search, she can't deny her surprisingly warm feelings toward her prospective groom. Could this honorable cowboy show her he's the husband she never knew she wanted? 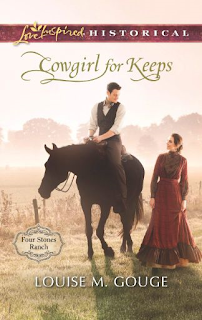 Cowgirl for Keeps July 2015
https://www.amazon.com/Cowgirl-Keeps-Four-Stones-Ranch-ebook/dp/B00SFQTOAS
Romantic Times BookClub 4-Star Review
Lassoing the Cowgirl: Rosamond Northam’s plans of building a high school take an unexpected turn when her father informs her she’ll be overseeing construction of a new hotel instead—with Englishman Garrick Wakefield. The newly arrived aristocrat seems to turn his nose up at all she loves about her Colorado hometown. The man is entirely insufferable…yet undoubtedly handsome. Garrick wants nothing more than to prove himself to his uncle, who has backed the building of this hotel. But he finds himself ever at odds with his pretty cowgirl partner over the plans. The American West is so different from his British home, but with Rosamond showing him the ropes, maybe he’ll commit to Western life…and a Western lass. 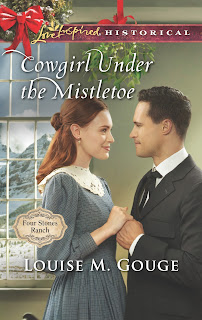 Cowgirl Under the Mistletoe December 2016
https://www.amazon.com/Cowgirl-Under-Mistletoe-Stones-Ranch-ebook/dp/B01F1RGB9U
Inspirational Readers’ Choice Award 3rd place!
A Colorado Christmas Courtship
Deputy Grace Eberly can outshoot and outride most men in Esperanza, Colorado…but lassoing a husband is an impossible task. At least she has her good friend Reverend Micah Thomas to keep her company. When outlaws threaten their community, the two join forces to stop them, and Grace’s feelings for the reverend deepen. But she’s sure he’d never love a too-tall cowgirl in trousers and boots. Micah believes that it’s time to find himself a wife—someone sweet and ladylike who can help him better serve the town. So why do none of the elegant young women of his acquaintance stir his heart like the feisty tomboy deputy? As they work to bring peace to the community, will Grace and Micah finally see that they make the perfect team? 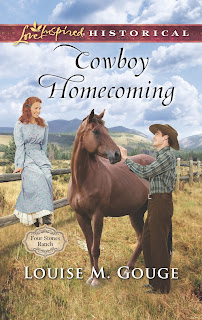 After two years, Tolley Northam returns home, transformed from a mischievous youth into an ambitious lawyer confident of winning his father’s approval at last. But he soon begins to wonder if the only way to do so is to marry family friend Laurie Eberly—a woman his father has always liked. If only she weren’t so adamant about refusing Tolley’s proposal…


Laurie’s childhood friend is now a handsome, accomplished lawyer with undeniable charm. But she can’t accept Tolley’s proposal; she believes it’s just to earn his father’s praise. First he’ll have to prove to her that he wants her for a wife not because his father thinks she’s the perfect match, but because he does.