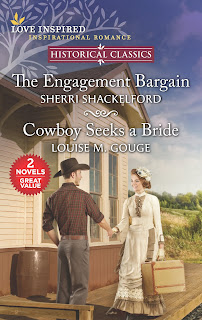 My July 27, 2021, rerelease is my 2015 historical romance, Cowboy Seeks a Bride,  the second of six books in my Four Stones Ranch series about a Colorado ranching family. In this reprint, it is paired with Sherri Shackelford’s The Engagement Bargain.

Marybeth O'Brien is everything rancher Randall Northam seeks in a wife…if she'd only say "I do." Although his family paid for her train ticket West with the understanding the two would marry, Rand won't pressure her to set a date. Especially since he suspects she's learned about his reckless past. Who would want to marry an untamed cowboy like him?

Marybeth won't marry until she locates her long-lost brother. And when Rand agrees to help her with her search, she can't deny her surprisingly warm feelings toward her prospective groom. Could this honorable cowboy show her he's the husband she never knew she wanted?

These reprints are still available at Harlequin.com. Please check them out!

Here is my first western novel, first published in 2014. 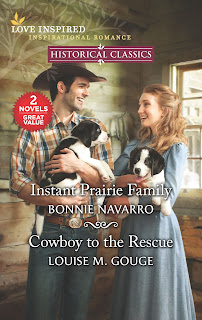 Cowboy to the Rescue

Though Georgia belle Susanna Anders agrees to accompany her father on a silver prospecting trip to Colorado, her heart belongs to the South. Then charming cowboy Nate Northam saves her father's life and gives them shelter at his ranch. Feeling gratitude is only natural, but falling for a Yankee? Both of their families would be outraged.

While Susanna's father recovers at the Northams' home, Nate can't help being drawn to the sweet Southern beauty…and wishing he were free to think of courtship. That is until shocking revelations compel both Nate and Susanna to choose where their loyalties lie—fettered to the past or to the promise of a bold new love…. 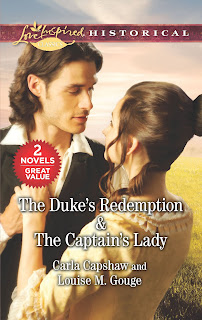 Torn between love and duty...
Captain James Templeton's orders from General Washington are clear. His target: Lord Bennington, a member of George III's Privy Council. The assignment: find Bennington's war plans. The risks: the future of the East Florida Colony, Jamie's life...and his heart. Because, in spite of the dangers, he's fallen in love with Lady Marianne Moberly--Lord Bennington's daughter.
Desperate to protect his country in its struggle for independence, Jamie carries out his orders with a heavy heart. But Marianne's persistence is a challenge he never expected.
With love and faith, they must navigate dangerous and troubled waters to win their future together.
Posted by Louise M. Gouge at 7:51 AM No comments: